ProxywayGuidesIs Sneaker Botting Still Worth It in 2022?

Is Sneaker Botting Still Worth It in 2022?

It's time to have the talk. 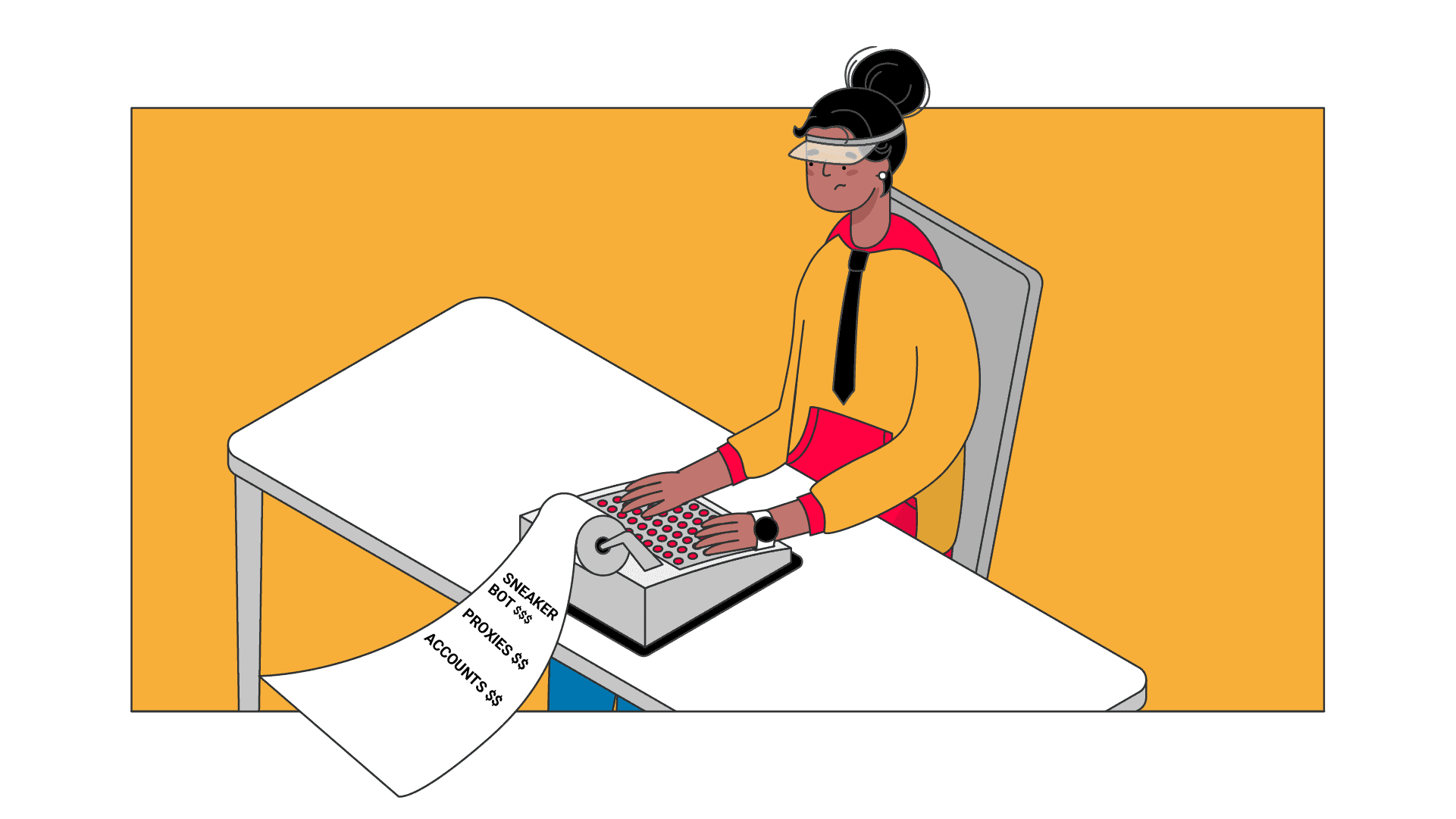 No matter if you’re a seasoned sneakerhead or just a newbie looking for a profitable side hustle – you might be concerned about the current state of the market. And you should be. Bot prices are falling rapidly. The most experienced sneaker botters are switching to consoles and NFTs. Stores are upping their anti-bot security.

Is this a sign that sneaker copping and reselling is coming to an end? Should you still attempt to bot sneaker stores in 2022? Or simply count your losses?

In this article, I’ll explain what exactly is going on in the market and what you can expect.

The Very Basics: What Is Sneaker Botting?

I’m sure you’ve heard about sneaker bots, but do you really know what they are? Let me explain what all the fuss is about.

A sneaker bot is an application capable of automatically opening a shoe website, finding the items you specified, and completing the purchase on your behalf.

Sure, you can do it yourself, but a bot completes the checkout process within seconds. If you power these beasts with proxies, you get hundreds of attempts at cleaning the virtual shelves. Let’s be real – that’s something no human can do.

Bots are used to obtain the most hyped-up and limited edition shoes. Once botters successfully cop, they flip the kicks on the aftermarket. The most surprising or, as some would say, infuriating part of the resale market is the markup. You can resell sneakers for hundreds – in some cases, even thousands of dollars over the retail price.

This business is so profitable that Nike’s vice president’s Ann Hebert’s son was caught botting Nike’s store and flipping the precious stock for serious cash.

According to research firm Piper Sandler, the sneaker resale market was worth $10 billion in 2020. That’s $4 billion more than in 2019. A report by Cowan projects that by 2030 the market can reach $30 billion growth.

These numbers alone conclude that the sneaker biz is far from dead, but whether you should take part in it is another topic of discussion. The resale market has forced both avid sneakerheads and regular sneaker shoppers to use bots even when they’re after just one pair of their holy grail. The competition is tough to handle.

What Are Retailers Doing about Bots?

It shouldn’t come as a surprise that sneaker sites aren’t happy about this highly profitable side hustle. After all, sneaker botters prevent regular users from getting a fair shot at copping the stock. That’s why major sneaker stores like Footlocker, Nike, and Supreme are strengthening their bot protection.

So, how exactly do sneaker stores fight back? They’re very secretive about the specifics. Who can blame them? The sneaky bot developers are constantly monitoring their every move, just so they can beat the stores at their own game.

But there are a few tricks retailers use to stop bots.

One of the most powerful strategies retailers have implemented so far is raffle. Bots triumph on the “first come, first served releases”, but raffles are a whole different story. They change the rules by randomizing who gets to buy the shoes.

Once Nike implemented raffle-based releases on the SNKRS app, it became one of the most frustrating brands to bot. To sneaker botters’ major disappointment, Footlocker recently followed Nike’s steps by introducing online raffles to its mobile app releases.

While raffles pose a challenge, they don’t make bots completely useless. Sneakers bots have several ways of winning at draws. Here’s one that’s easiest to grasp: most of the bots allow running hundreds of tasks and all of them enter a draw as different, unrelated individuals (but only if you use proxies), maximizing your chances to cop.

What newbies dread more than raffles are CAPTCHAS. This anti-bot security measure has given a lot of Ls to inexperienced botters.

CAPTCHAs require a special human touch. Some of them are invisible – they determine whether you’re a bot or not by tracking your mouse movements, typing activity, and analyzing your traffic. Others are more straightforward – they require you to select specific images on an image grid or simply click on the checkbox confirming that “I’m not a robot”.

Many stores are now familiar with the jigging techniques botters use. To combat them, some go as far as to check each order and cancel those that look suspicious. Sounds extremely time-consuming, but some retailers are determined to catch us all in the act.

Shoe websites don’t try to do everything by themselves (unless they’re Shopify) – they often partner up with security companies for bot protection. These companies bring browser fingerprinting, IP reputation checks, usage pattern analyses, and other techniques to combat bots.

Today, most major sneaker websites use some kind of bot protection. You’ve probably heard of DataDome, Akamai, Queue-It, PerimeterX, and similar names. For example, Footlocker employs both DataDome and Queue-It for releases, and it further runs all transactions through a very strict payment processor called Adyen.

While the best sneaker bots can still (more or less) cut through everything, they don’t find it easy. Bot developers have to be on their toes, as each release brings new challenges to overcome.

It’s not just the stores that are trying to bring some fairness into the sneaker game. SoleSavy is an exclusive group that uses bots to help sneaker enthusiasts get shoes, so they wouldn’t have to rely on resellers. The service takes away stock from them, allowing the OG sneakerheads to increase their sneaker collections and preserving the community.

The group has already bought more than $10M worth of sneakers since 2018.

The State of Sneaker Botting Entering 2022

The truth is, it’s getting harder to bot sneaker stores, especially if you’re new to the game. Only the most experienced and resourceful sneakerheads are capable of effectively navigating the changes in the market. Others have a lot to learn.

The bot developers are feeling the rising tension too. Many of them struggle to keep themselves in the game. Currently, there are hundreds of bots on the market, and the competition between them is fierce. No one wants to lose their ranks in the community; however, even the most hyped-up bots fail at some releases (poor Cybersole’s 5.0 – we expected so much of it).

Currently, there aren’t that many easy targets left. Nike has been all but forsaken; Shopify’s bot-protected sites are hard to handle; even Supreme has stepped it up. Yeezy Supply and Footsites remain the most profitable targets; but with Footlocker going raffle, sneakerheads are understandably worried.

It doesn’t help that the second part of 2021 didn’t really have that many hot releases. Sure, some grails did drop, but way fewer compared to earlier times.

It’s evident that these challenges are pushing sneaker botters to look at easier and more profitable targets. Many are making the shift to botting consoles, CPUs, collectibles, and of course the hottest trend of the market – NFTs. At least while the sneaker industry is down.

However, even that is under pressure.

Recently, lawmakers at the US House and Senate proposed an act to outlaw the so-called Grinch bots. The legislation aims to make Christmas shopping a lot less stressful by making the retail bots illegal. Similar laws are being proposed in other countries like the UK.

A similar law has already failed once. So, while there’s reason to believe the same outcome will happen again, the possibility of outlawing retail bots may push the whole sneaker resale market underground.

Is It Worth Buying a Sneaker Bot? Or, the Costs of Botting

If you’re still considering whether you should get involved with sneaker copping, you may not care about anti-bot security and moral or legal implications just yet. What you probably care about is whether you can afford to start cooking kicks or not.

I’m going to be honest: starting copping is an expensive ordeal. Just like any other business, it requires some solid starting capital. Let’s see how much everything costs in this biz.

To get a better idea, let’s put everything together. Imagine that you decide to get the Wrath AIO bot and run it on a sneaker server to cop 5 pairs of Adidas Yeezy 450 “Sulfur” on Yeezy supply. You decide to use approximately 50 Gmail accounts and purchase the Prestige plan from Proxydrop with 5GB of traffic.

Of course, this is a pretty luxurious scenario. You could opt to rent a bot instead ($7-35 per day), forgo Gmails and a sneaker server. But I just wanted to illustrate that sneaker botting can be – and often is – expensive. It may include additional expenses that we haven’t covered here.

As you can see, sneaker copping is an expensive ordeal. It’s also complicated – at least in the beginning. So, the answer is: it depends.

To score Ws you need to do a lot of research. Get yourself familiar with the target store, its security measures, and release type. Make sure that you know exactly how your bot works and how to set it up as fast as possible. Research different copping setups. Watch YouTube videos of successful live sneaker copping. Learn as much as you can and practice.

Then, make sure that you’re copping the right shoes. You’ll need to recoup a solid investment, so make sure you know what you’re doing. Join cook groups, follow sneaker trend experts on Instagram and Twitter. Find out what others are cooking. This way you’ll be able to tell the difference between the holy grail and a brick.

Finally, don’t give up if you fail the first few tries. It takes time to get the grip on things, so you’re bound to burn a few proxies or accounts doing so.

Believe me, it’s a time-consuming process, but the more effort you put in the bigger your chances of copping are. Yes, you can make big amounts of money if you do everything right. However, keep in mind that profit is not guaranteed here. These days sneaker botting is harder than ever before.

Is sneaker botting dead? I hardly doubt so.

The sneaker reselling market is highly unstable right now. That’s why many seasoned sneaker botters are aiming at easier targets, such as NFTs and GPUs. However, cooking sneakers is still profitable, especially if you do it right.

And even if you don’t succeed all the time, one of the most appealing things about sneaker copping is the community. Cooking shoes is an experience, and many sneakerheads stick around because of the people they can share it with.

So, do you think you have what it takes? Sure, it is a complicated process that requires a lot of time and money, but it’s still a good side hustle. If you decide to join the sneakerhead ranks now, I’m pretty sure that it’s not going to be easy, but it’s going to be worth it.