ProxywayBest Proxies & ToolsSneaker ProxiesSupreme Proxies
We use affiliate links. They let us sustain ourselves at no cost to you.

So, how are those Thursdays making you feel? Excited, anxious, disappointed? Maybe all three in a row? That’s Supreme for you – blink, and that cool tee with the boxy red logo is gone… only to appear a few hours later on stockX for thrice the price. Pity.

But hey, there’s a way around this, and you know it. That’s why you’re here, after all, to cop Supreme. You’d better have your sneaker bot ready, ‘cause today we’ll show you some of the best Supreme proxy providers that will help you power through every drop. Full handed, of course. So, giddy up, because here are our faves. 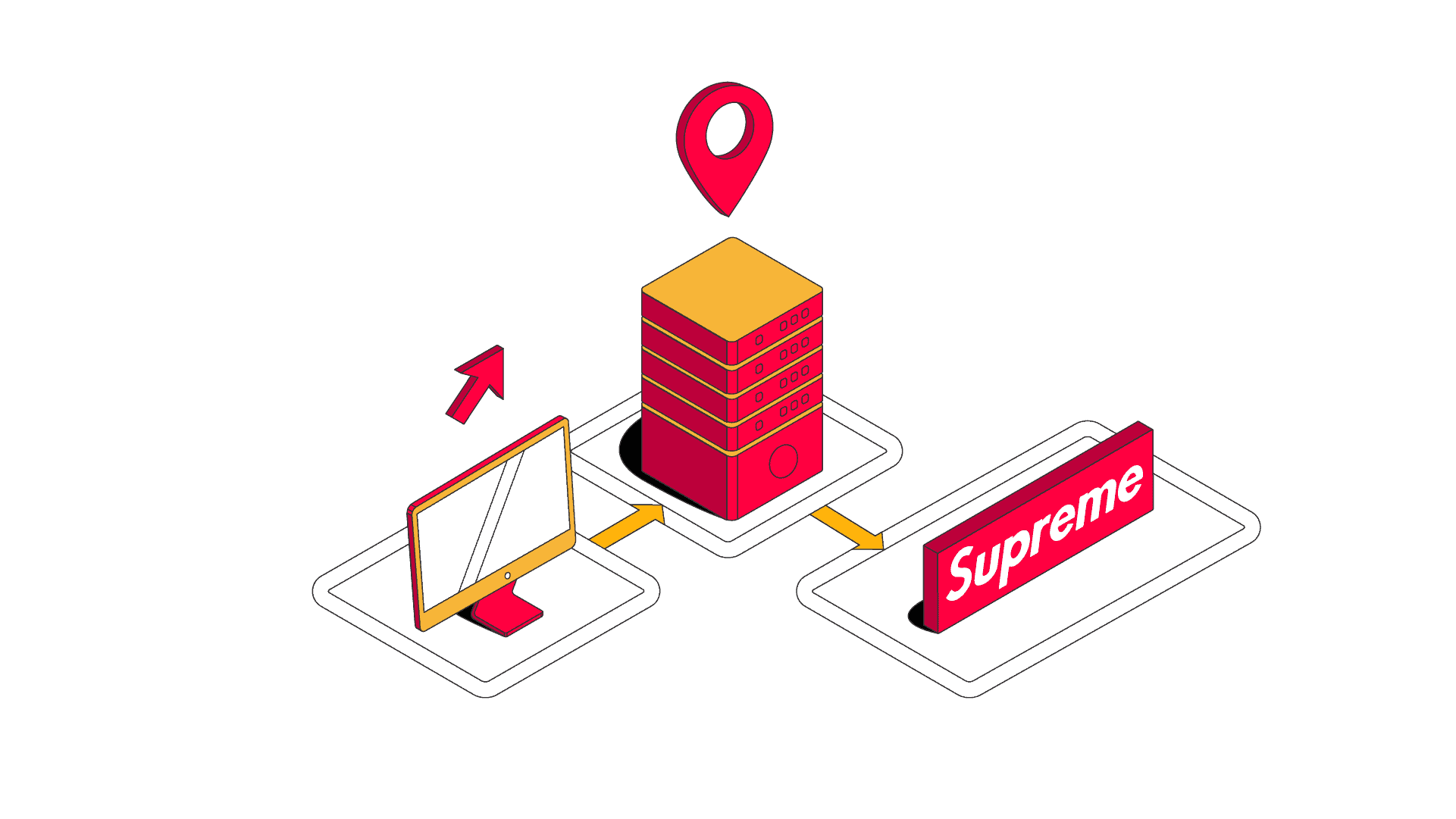 Smartproxy is a fine choice for any sneakerhead. Its large pool of proxies is fast, covers the right locations, and is affordable enough both for individuals and resellers.

Another great choice for resellers, basically Smartproxy on steroids. Oxylabs' pool of IPs has few equals, whether in size or performance. You get great documentation and an API.

NetNut owns the largest ISP proxy network in the world, and they sure pack a punch. Good targeting options in the US, no need to rotate. But it's best for resellers.

Luminati's in a strange place: its plans make the most sense for reselling, but you're not allowed to. The pay-as-you-go plans are pretty expensive. Otherwise, a quality service.

PacketStream has a good infrastructure and very cheap residential proxies. On the other hand, the proxy pool isn't very big, especially outside the US. Worth a try.

Proxydrop sells optimized residential proxies with speed filters. Pretty expensive per GB, but you don't have to buy much, and the plans don't expire. Good for individual cooks.

Just in case DC proxies make a comeback for Supreme. Blazing SEO has sneaker-optimized IPs that are fast and carry no bandwidth limits. All for an attractive price.

Every Thursday at 11 PM EST/BST, Supreme online stores release a limited batch of clothing. They’re available until sold out, at which point the release ends. Unlike other shoe stores, Supreme is still using the “first come, first serve” model, meaning that the fastest shoppers win. This is where bots and proxies come in – by using faster connection speeds and automating the checkout process, they let you beat the competition and buy the gear you craved for.

What Is a Supreme Proxy?

A Supreme proxy is an IP address on a fast internet connection. You use them to access the supremenewyork website in place of your own IP. In the eyes of Supreme, each proxy is like a different identity, which lets your Supreme bot cart many items without getting blocked.

Do You Need Proxies for Supreme?

It depends. You’ll want proxies for Supreme if you have a slow internet connection, live in a country with no Supreme stores, or if you want to buy multiple items from one release. Even if you need a single thing, proxies will give you more attempts to get it.

On the other hand, if you’re only eyeing one item and are willing to take your chances, proxies aren’t necessary. But you’ll still want to use a sneaker bot to compete with others. Copping Supreme is a contest of speed, after all.

How to Use Proxies to Buy Supreme

You use proxies with a bot. Most Supreme bots simply let you enter a list of proxy IPs and then use those for different tasks. Try to have no more than one proxy for one task. These are the very basics.

If you don’t know what a proxy IP looks like, there can be two formats:

If you’re using the IP address and port format, simply paste the list of IPs into your bot. If you have a hostname, it will remain the same, and only ports will change. Behind each port, there’s a different IP.

Until very recently, the best proxies for Supreme had to meet three requirements: 1) be close to the store’s servers, 2) be as fast as possible, 3) be able to access supremenewyork during a drop. This meant getting private datacenter IPs in Ashburn, London, Tokyo, or another relevant location.

Now, however, Supreme has implemented a stricter security mechanism which bans not only datacenter IPs but also some ISP proxies. As a result, residential proxies have become the preferred proxy type. You still have to choose the right location, and speed still matters. There’s one more thing you need, which is sticky sessions – the ability to hold the same IP address for 10 to 30 minutes.

So, to recap: get fast residential proxies with sticky sessions and close to the online store’s servers. Luckily, that’s exactly what our list offers (with some extras thrown in if you’re feeling adventurous).

More about the differences between residential and datacenter proxies.

Do I Need Proxies for Supreme?

If you have a slow internet connection, live in a country with no Supreme store, or want to get multiple items from a release, then yes.

How Many Proxies Do I Need for Supreme?

It’s best practice to use one proxy for one task. You can calculate from there.

Datacenter or Residential IPs for Supreme?

We suggest residential, then maybe ISP proxies. Datacenter IPs are down at the moment.