ProxywayGuidesIPv4 vs IPv6 Proxy Servers: How Do They Compare?

IPv4 vs IPv6 Proxy Servers: How Do They Compare?

Should you start using IPv6 proxies? Not quite yet. 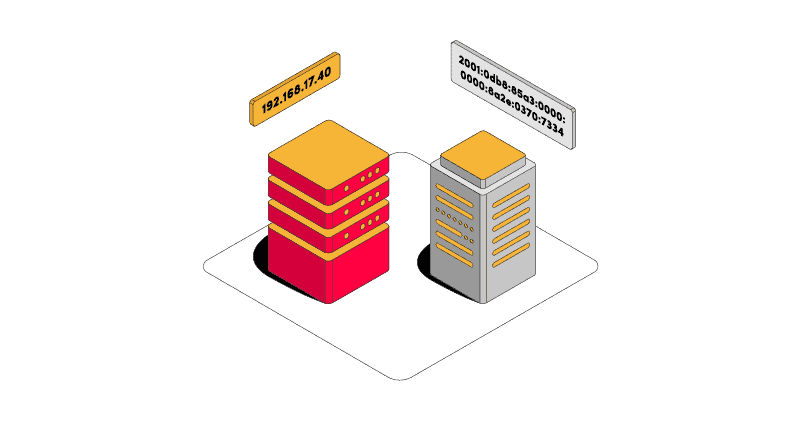 Today, IPv4 is still the dominant type of IP address. If you’re buying proxies, they’ll most likely use the IPv4 protocol. But more providers are starting to offer IPv6 proxy networks, and their numbers will only increase in the future. This article will show you how the two proxy types differ, and how choosing one over the other affects you as a proxy user.

The Basics of IP Addresses

An IP address is a string of numbers that identifies devices connected to the internet. You get an IP whenever you use a landline, Wi-Fi, mobile, and even local connection. Without an IP address, devices on the internet wouldn’t be able to communicate with one another.

For example, your phone gets an IP address when you use your carrier’s 4G network; its IP changes when you return home and connect to your home Wi-Fi.

An IP address carries some information about you. It can show if you’re using a home connection and your approximate location.

What Is an IPv4 Proxy?

An IPv4 proxy is an IP address of a datacenter or residential device that uses the IPv4 protocol.

“v4” simply means that it’s the fourth version of the IP protocol. The first three versions were for testing purposes; the public internet started with IPv4. Don’t ask me why.

IPv4 has one problem: everything’s connected to the internet nowadays, and four billion addresses aren’t nearly enough. We’ve had this issue for over a decade now, but IPv4 remains the most used protocol by a large margin. This is good for proxy users; I’ll soon explain why.

The Myth of Virgin Proxies

But first, let’s clarify one misconception – the myth of virgin proxies. “Virgin” means that a proxy IP hasn’t been used yet. But with so few IPv4 addresses, it’s almost impossible to find truly blank-slate proxy IPs. And it’s getting harder every day. So, this term is a marketing gimmick, at least when it comes to IPv4 proxies.

Why Mobile Proxies Are so Valuable

The shortage of IPs meant that internet service providers had to find clever ways to identify their users. Mobile networks came relatively late to the game, so they’re using one of such methods. Called Carrier Grade Network Translation (CGNAT) technology, it’s what makes mobile proxies so valuable.

In a nutshell, CGNAT shares one IP address between hundreds or even thousands of users at a time. If a website bans such an IP, it risks disabling access to many people. It’s a large part of the reason why mobile proxies are considered the hardest to block. The other part is that many popular proxy targets like Instagram and Facebook are primarily aimed at mobile users.

What Is an IPv6 Proxy?

An IPv6 proxy is an IP address of a datacenter or residential device using the IPv6 protocol.

As you might have guessed, “v6” signifies the sixth version of the IP protocol. It was officially launched in 2012, in efforts to solve the IP shortage.

Why Are We Still Using IPv4?

Despite the obvious need for IPv6, the protocol is nowhere near IPv4 in adoption. After all these years. How come?

Well, there’s one good reason: it’s not compatible with IPv4. So, the whole internet would have to upgrade to IPv6: all the ISPs, data centers, cloud providers, and so on. Turns out, many find it easier to invent clever workarounds instead.

Can You Get IPv6 Residential Proxies?

Not really. None of the major residential proxy providers are offering residential IPv6 proxies at this point. They shouldn’t be impossible to find if you rummage deep enough in places like BlackHatWorld – but such proxies are by no means widely available. In fact, providers even go to great lengths trying to keep IPv6 out of their proxy pools. Here’s some data from our latest research where we tested 8 major residential IP networks:

Is It Worth Using Pv6 Proxy Servers?

It depends. While residential proxy providers don’t offer IPv6 proxies yet, there’s no shortage of companies selling datacenter IPv6 addresses. They make a pretty sweet deal, as such proxies are several times cheaper than IPv4 and you can whole subnets of unused addresses.

In reality, the benefits are much less impressive. If you block even one IPv6 address from a new subnet, websites won’t hesitate to blacklist the whole range. This can cost you hundreds of even thousands of IPs.

So, the answer is clear: right now, an IPv4 proxy server is better for sure. It not only supports more websites but also offers better quality residential addresses.

Remember: a “virgin” IPv6 proxy carries much less weight than some marketers would like you to think.

Why Are IPv6 Proxies So Cheap?

There are a lot of possible IPv6 addresses. So, data centers can create them by thousands or even millions, all unused. However, this also means they are very easy to ban.

Are IPv4 Proxies All Used Up by Now?

Kind of. But you can’t just ban an IP address for good. Most residential IPs go around different people, so websites have no choice but to unblock them after a while.

Can I Use IPv6 Proxies for Sneaker Bots?

Please don’t. Sneaker retailers have some of the best anti-bot protections out there. Your IPv6 proxies will stand no chance.

Why Use a Proxy Server?