ProxywayComparisonsOxylabs vs. Luminati: Which Is the Best? 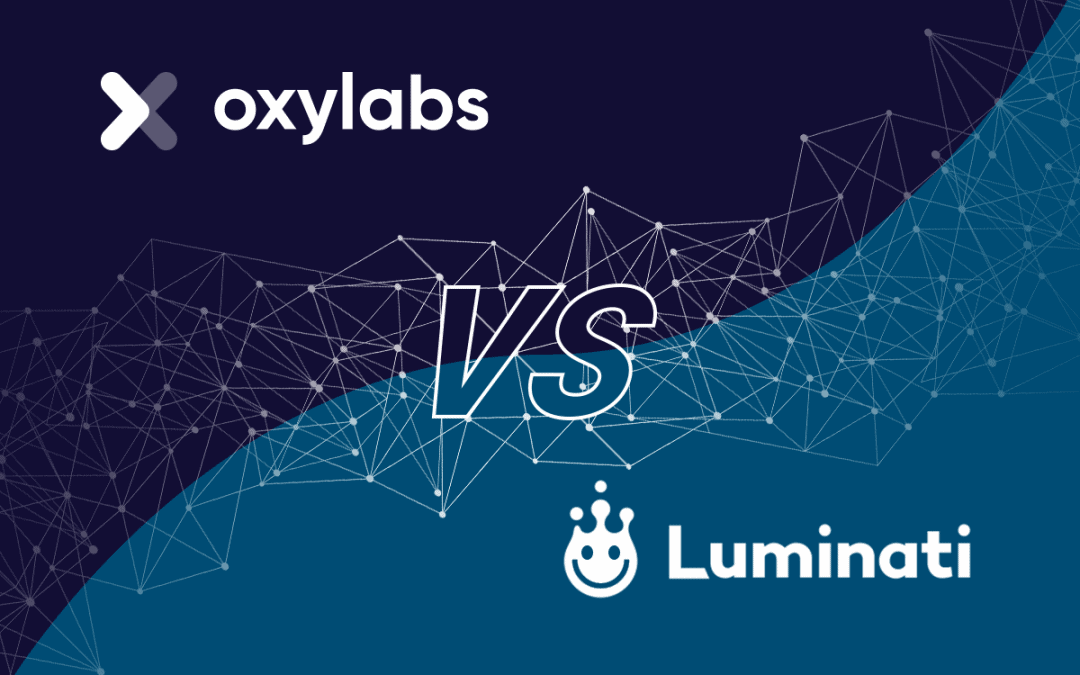 Oxylabs and Luminati are the biggest players in the game of proxies. They are great rivals that have been competing with each other for a while now, and neither of them is backing down. Both have advantages over the other, but the most important question is – which one is the overall better proxy provider?

As you can see from the table, Luminati has a bigger proxy pool, however, both being in the 30M+ mark, the difference is not substantial enough in terms of performance and flexibility.

Both providers offer proxies in all 195 countries and both allow city-level targeting.

Oxylabs has an unlimited number of users, whereas Luminati has a more complicated system. You can create zones with them, and creating zones (plans) serves the same purpose as sub-users because you get a different part for your username (username-zone_name) and a separate traffic count.

When it comes to supported protocols, both Luminati and Oxylabs proxies support the most popular HTTP and HTTPS protocols. In addition, SOCKS5 is also supported by both providers, which is not as common. It is also worth mentioning that Oxylabs has a unique product called Real-Time Crawler (RTC) which essentially does all the work for the client, making scraping easier than ever before. With RTC, the process is as simple as entering a target URL, selecting some parameters and receiving formatted and ready to use data. Luminati, on the other hand, does not offer a similar advanced product.

Both of these providers offer professional 24/7 support via various methods, however, Oxylabs excel in this regard as they assign a dedicated account manager for each new client. This means that each time you need help with something, you will be able to communicate with the same person who already knows your needs and all the nuances. Oxylabs also informed us that they have a dedicated team of data analysts which, according to them, is always ready to provide custom insights into how your proxies are used and whether any optimizations are necessary. Luminati also seem to have account managers, however, we were unable to confirm whether they are actually dedicated.

As for the dashboard – Luminati wins here with a better dashboard which offers more functionality. Oxylabs also offer a decent enough dashboard but as of yet there is still work to be done to catch up with Luminati. When it comes to Luminati’s support, in our full Luminati review we do mention that even though their live chat is great, their ticket system response time takes up to 5 hours.

The overall rating falls to 9.3 for Oxylabs and 8.5 to Luminati – why so? You can check out our Oxylabs full review for more clarification on our site, but for now, let’s check out more statistics.

It is clear that the success rate of Oxylabs is much higher than Luminati’s. Luminati also has a lot more timeouts and blocked IPs. There were some connection errors as well, but Oxylabs had a little more than Luminati. However, it’s clear that the overall performance is won by Oxylabs here.

Comparing Oxylabs and Luminati to Other Proxy Providers

As the graph before showed us, Oxylabs did better than Luminati in all cases except for connection errors, however, it still beats the industry’s average.

Luminati reaches Oxylabs in most cases but really flops out with Google and Yandex. Google requests are higher than other proxy provider average but don’t beat Oxylabs’ high numbers. And when it comes to Yandex, it really underperforms, as it doesn’t even reach the overall average by more than 10%. 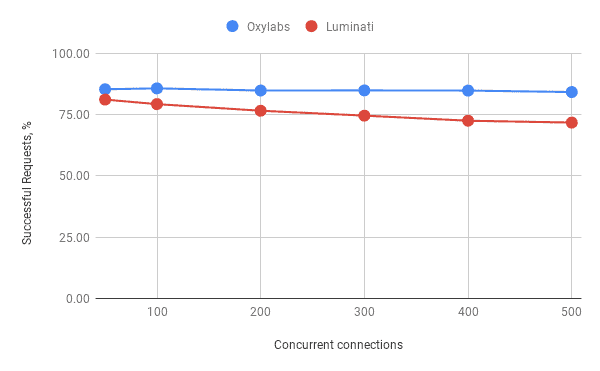 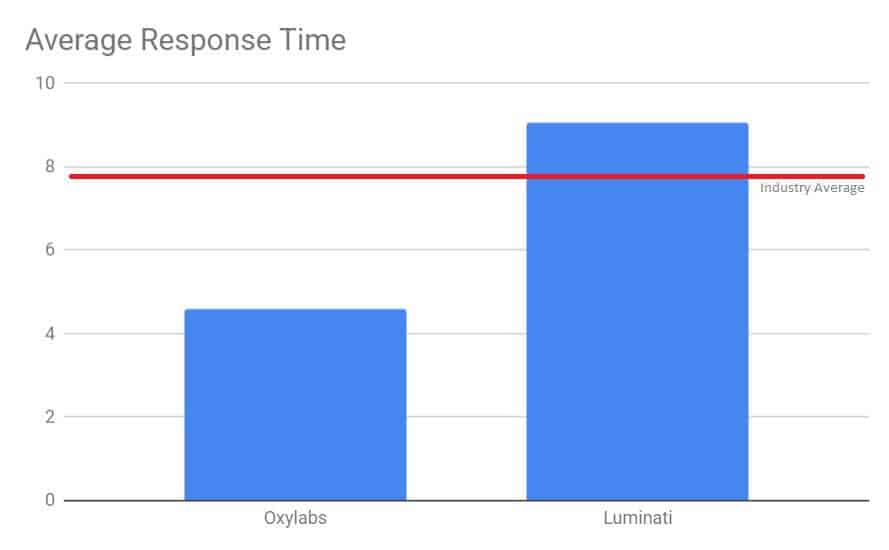 To expand the depth of this comparison, it’s worth to take a look at the experiences of these proxy providers’ clients and Trustpilot is a good way to do exactly that. As of July 11th 2019, this is where things stand:

When it comes to pricing plans, Oxylabs has really clear and to the point plans where you can easily see what you’ll get for what you pay. Luminati, meanwhile, has a pricing structure which is a lot messier, where you need to choose from different plans by country and by plan depending on the amount of data you need. We much prefer the simpler pricing structure of Oxylabs.

Why is Oxylabs Better Than Luminati?

Quick answer – Oxylabs proxies performed better than Luminati in all of our tests. Even though Luminati is better in some regards, after all it boils down to proxies and their performance. And in this regard, Oxylabs is a clear winner with faster and better performing proxies not only against Luminati but against the average of other proxy providers.