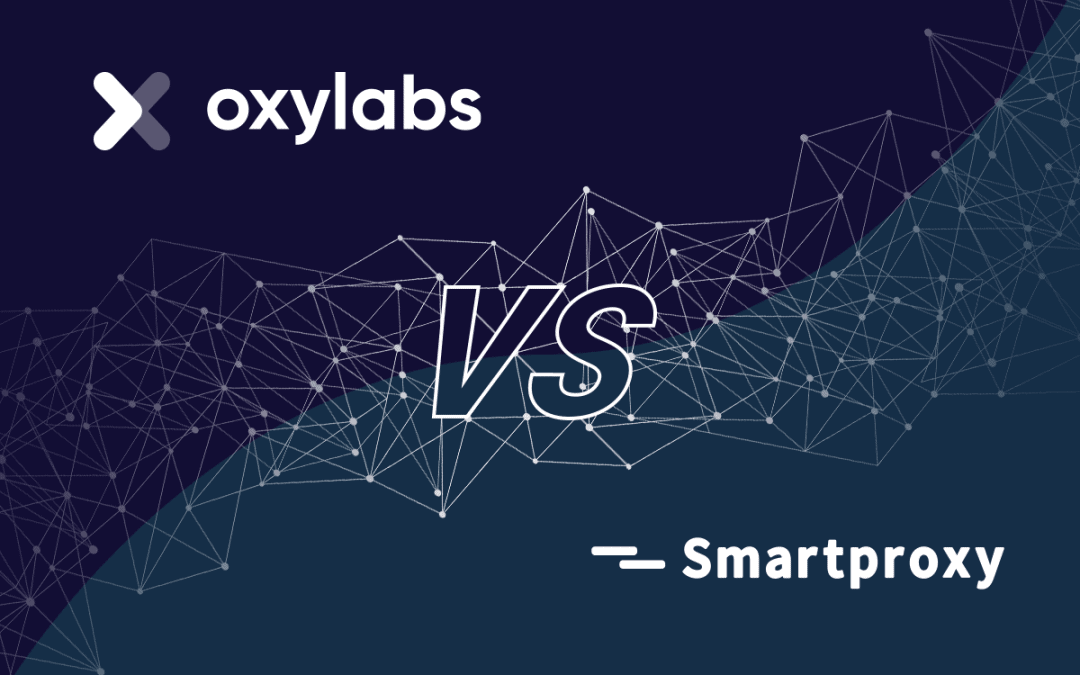 When it comes to choosing residential proxies picking the right proxy service provider might be difficult because there are simply so many of them. To help you decide, we’ve put two popular proxy services to the test to see which performs better. This time, it’s Oxylabs vs. Smartproxy.

This comparison will give you a broad overview of the two proxy providers, but if you want to learn more, read our Oxylabs review and Smartproxy review.

Both Oxylabs and Smartproxy have a decent set of features, but there’s a clear difference between them regarding IP pool size. Oxylabs has 30M residential IPs, whereas Smartproxy offers 10M proxies. Although Smartproxy offers country-level targeting, Oxylabs goes even further and lets you filter proxies by ASN or mobile carrier.

With Oxylabs you can create as many users, as you want. Smartproxy also lets you create additional users, but this option depends on what plan you subscribe to. We tried Advanced plan, which allowed us to create ten sub-users.

We should give a big thumbs up to Smartproxy for some of their dashboard features, namely for the one which allows you to renew your plan directly in the dashboard. Oxylabs has a decent dashboard too, but you have to contact your dedicated account manager if you want to upgrade or renew your plan.

Before we go into more in-depth comparison examining proxy performance, it’s important to note that both providers offer credentials and whitelisted IPs as their proxy authorization method. Also, they both have a session control feature, which we find extremely useful.

We gave the overall rating of 9.3 to Oxylabs and 8.7 to Smartproxy. Now, let’s see how their proxies performed when we put them on a big load.

As you can see, both Oxylabs and Smartproxy have a high success rate, quite similar rate of connection errors and timeouts. Oxylabs is doing a bit better than Smartproxy only with blocked IPs.

Comparing Oxylabs and Smartproxy to Other Proxy Providers

As the table below shows us, Oxylabs and Smartproxy beat the industry’s average in all categories. You can expect a high success rate and low level of blocked requests, so it’s safe to say that you’ll do alright by choosing any of the two providers. 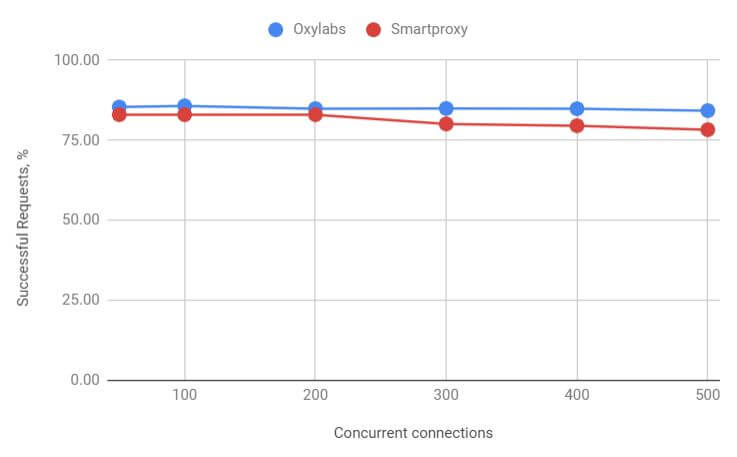 If you want to see the detailed Oxylabs and Smarproxy test results, check out their full reviews.

Compared to Smartproxy, Oxylabs has a bit faster response time winning over by 0.27 s. However, both providers have much faster proxies than all other proxy providers we tested. 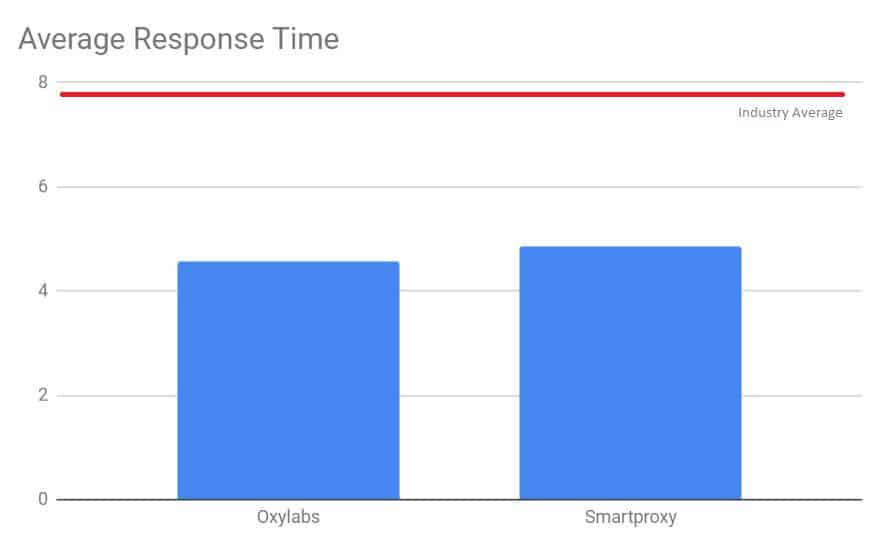 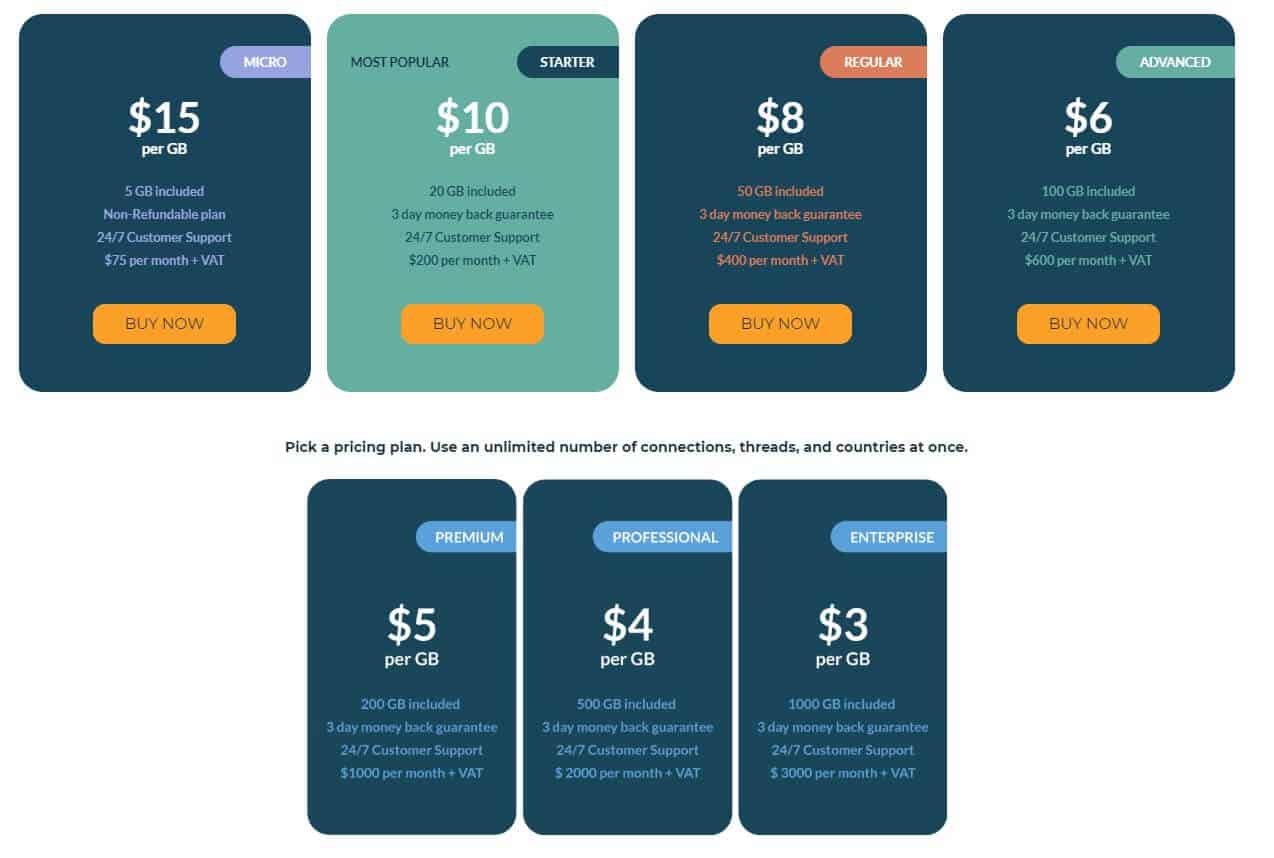 Oxylabs offers four different pricing plans, whereas Smartproxy has seven, including a micro plan that offers $15/GB and $75 per month with 5GB included.

The cheapest Oxylabs pricing plan costs $600 a month, so it’s a better fit if for more significant data collection projects. The main drawback of Smartproxy is that they don’t offer a custom plan.

With both providers, price depends on traffic, so you’ll be paying per GB.

Why Oxylabs is Better Than Smartproxy?

Oxylabs and Smartproxy are on the better list of proxy providers, but Oxylabs is a winner in this comparison because they have a much bigger proxy pool, more proxy filtering options, and allow you to create as many users as you want. Also, Oxylabs proxies performed slightly better than Smartproxy’s in most of our tests. If you want to read a detailed Oxylabs residential proxies review, click here.